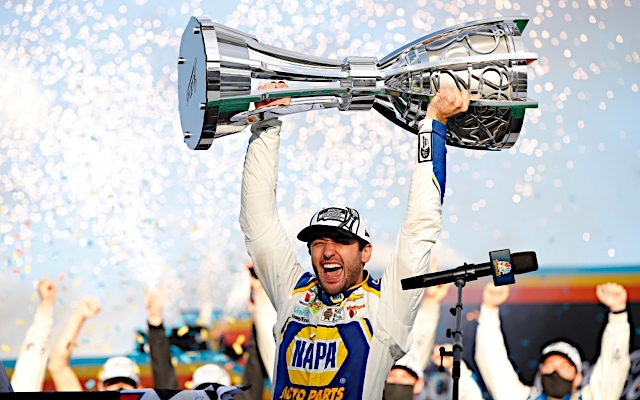 On November 8, 2014, NASCAR Nation witnessed a second generation racer leave his mark on the sport by clinching the NASCAR Xfinity Series at Phoenix Raceway. Six years later at the same track, he was able to secure another, but this time it was the NASCAR Cup Series title.

Jim Campbell, U.S. vice president of performance and motorsports for Chevrolet, says being apart of the road to stardom has been a rocketship ride.

“I remember he made his mark in the Xfinity Series and won that championship. It was a big moment. He had a great season and brought that championship home,” Campbell told POPULAR SPEED. “And then to watch so many times where he was top 2, came in second or third, and then he finally got his first win (at Watkins Glen), and then to see his popularity grow and grow and grow. We were talking about that earlier. Then for him to have five wins this year, the wins at the right time and then bring him a championship.

“He is so happy. To see the embrace he had with his crew, with Alan (Gustafson), they’ve got just incredible chemistry. I watched them in kind of the championship area, got a chance to see his parents for the first time since he got out of the car and he was a champion just like his father. That was such a special moment. He is an exceptional young man. He’s a young guy, and he is talented behind the wheel. He’s also been a great representative for us not only on the track but off the track. And think about all the years ahead. That puts a smile on my face.”

While he has left his mark with Chevrolet through these past six years, the story goes back further than that as the manufacture knew he was going to come into their hands from a young age, thanks to a contract he signed with Rick Hendrick. Against others around him saying he should not, the boss signed the 14-year-old to a development deal following a discussion with James Finch.

“I started getting some videos, and then I called Bill (Elliott), and they came down and we talked,” Hendrick explained. “I just watched him in those late models and then actually saw one of the races he was racing Kyle Busch. Just the way Bill raised him and what a polished young guy he was and had a lot of talent, I thought, man, he’s just 14 years old so sure want to take a chance if we can. You’ve got to find a guy like that early. And again, I think it was a combination of skill, pedigree and just a sharp young man.”

He proved to Hendrick and those around him that they were right about their decision quickly, winning in his sixth NASCAR Gander RV & Outdoor Truck Series start at Canadian Tire Motorsports Park. In total, he scored just two finishes outside of the top-10 across nine appearances.

It set the tone for his ascend into the Xfinity Series, where he put together a pair of solid seasons with JR Motorsports, highlighted by the title in 2014. Ultimately, it made no surprise when Hendrick announced he would be joining their Cup Series team, replacing the seat left vacated by another champion in Jeff Gordon.

While it’s been fun to watch him make his way up the ranks, it has not been all perfect with some hardship moments along the way. He failed to win a race in his rookie season, coming close on multiple occasions while making the playoffs, and suffered probably the biggest defeat when he was turned by Denny Hamlin at Martinsville Speedway leading in the final laps.

There has also been other frustrating moments, such as wrecking out of Phoenix Raceway last year to miss the Championship 4. There was also some this year, including Darlington Raceway when he gave Kyle Busch the middle finger after being turned while seeming having the quickest car. There’s also the Coca-Cola 600 at Charlotte Motor Speedway where he dominated until a pit call in the late stages resulted in a runner-up.

Those moments may have been tough to get through at the time, but they helped shape and build him into the driver he showcased behind the wheel the last two weeks.

“They help sculpt you,” Elliott said. “They help prepare you for the bigger moments down the road. If only I could have seen the bigger picture then. But that’s just not how it works, and you have to go through those things to really understand and have a better handle on big moments.”

It seemed he was going to head back down that road again, after not starting the Round of 8 as he would have hoped with an unscheduled pit stop for a tire separating relegating him to a 20th-place finish at Texas Motor Speedway to leave him below the cut-line entering Martinsville Speedway. Simply put – it was win or bust.

Whether it was utilizing those previous lessons and experience, or just having a fast Camaro underneath him, he was able to get the job done by winning at Martinsville Speedway. It then carried over to Phoenix, as he made his way to the top-five by the end of the first stage despite having to start at the back of the field due to failing pre-race technical inspection twice. The speed was there through the event, and stretched out to a four-second lead at the end, he was able to cruise to his first championship.

Climbing out of the car, the disbelief could be seen written all over his face as tears formed in his eyes. Being around the sport for years watching his father, to going through the rough patches had taught him one thing – this was a special moment some people just get to dream about.

News flash – it is not a dream, but rather the beginning of potentially the next big legacy in the sport.